Cape Town, or the “Mother City”, as it is more affectionately known, is a place where old and new converge – in history, architecture, culture and people.

The city is dominated by Table Mountain, and is on the edge of a peninsula – with mountains, valleys and rivers, and the meeting place of two oceans – the Indian and Atlantic. It is a city of contrast and immense natural beauty, where the pace and bright lights of an urban centre meet the relaxed feel of the ocean, forests and mountains. Cape Town is firmly positioned on the international map and offers a myriad of things to do and places to see, whatever your tastes, inclinations or budget. In essence, it is a gateway to the rest of Southern Africa. 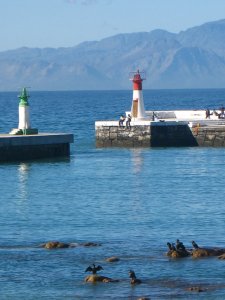 As the oldest city in South Africa, Cape Town has a cultural heritage spanning more than 300 years. It also has the top five national attractions in South Africa – Table Mountain, the V&A Waterfront (which is a superb shopping and holiday experience on a working harbour), Robben Island (where Nelson Mandela was incarcerated), the Cape Town Wine Routes (having some of the world´s best wine farms), and the Kirstenbosch Botanical Gardens (on the slopes of Table Mountain).

In terms of business, most companies operate head office functions from Johannesburg (the real economic hub of Southern Africa), with Cape Town as a secondary office location. Cape Town has a very much more relaxed feel than the frenetic pace of Johannesburg, and is preferred by many people for this reason. I visited Cape Town while I was in South Africa for our annual actuarial careers fair at the University of Pretoria, one of South Africa’s leading universities, located in South Africa’s capital city, a half hour drive from Johannesburg.